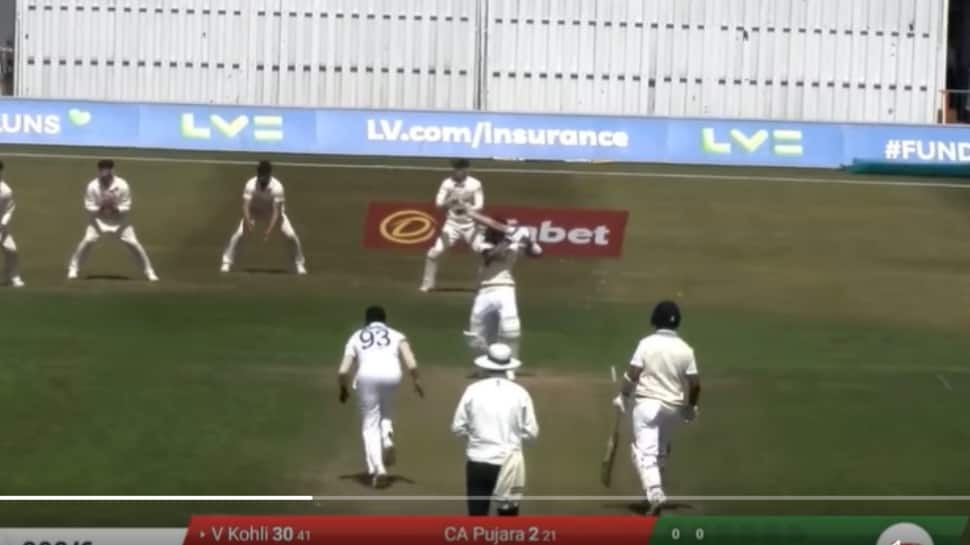 India vs Leicestershire warm-up match: Two of India’s top cricketing stars Jasprit Bumrah and Virat Kohli rarely get into a one-on-one contest. It generally happens in IPL wheren Kohli, representing Royal Challengers Bangalore bats against Mumbai Indians’ Jasprit Bumrah. But in red ball cricket, this contest is rare to see. That is why the India vs Leicestershire practice game was special as the two cricketing giants came up against each other. Yes, Boom Boom Bumrah was bowling to King Kohli and it was a sight to behold.

On the third ball of the 55th over, Bumrah bowled a short of length delivery to Kohli, who easily played an upper cut for a maximum over the deep point region. Not to forget, Cheteshwar Pujara who batted for India in the second innings also tried to play the upper cut shot but he could not connect properly. But Kohli showed how it is done a few moments later with a fabulous shot. The shot instantly became a hit among the fans who did not stop themselves from sharing it on their timelines.

Kohli was eventually dismissed by Bumrah only, who had his sweet revenge in the end. Kohli scored a brilliant 67 off 98 balls which included 5 fours and 2 sixes respectively.

Watch out Kohli’s six off Bumrah and fans’ reactions below:

Kohli attacking and defending incredibly well against the likes of saini, bumrah(PLAYED AN UPPER CUT AGAINST HIM), prasidh, and Sai Kishore(kinda surprised) makes me so happy. Need test runs from kohli man, been a long time. Universe, if you’re listening, please be kind. _

Pujara tried to upper cut Bumrah before and couldnt connect and Kohli shadow batted and showed what he would do and then he actually did play that shot. https://t.co/RFQhb1ZKir
— Saad Mohammed (@_saadmd__) June 25, 2022

At the end of Day 3, India led by 366 runs. They had declared the first innings on 246/8. The bowlers led by Mohammed Shami (3 wickets) bundled out Leicestershire for just 244. Apart from Shami, Jadeja also picked up 3 wickets while Shardul Thakur and Mohammed Siraj picked up two wickets each. One worry for India is Rohit Sharma’s presence in the final Test vs England that starts on July 1 at Edgbaston. The Team India captain has tested positive for coronavirus on June 25 and is waiting for another round of RTPCR test. Till then, he will remain in isolation.